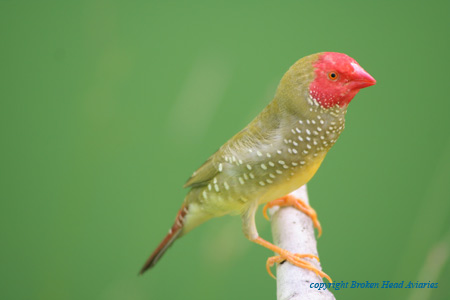 These birds are in the easy to keep and breed category; fairly cheap, readily available and compatible with most finches. 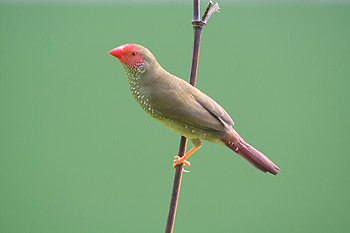 Star Finches are said to be found around creeks and waterways in the reeds and grasses that grow around them. This species is definitely a lover of this type of habitat, as in the aviaries they love to feed on the long grass seed stems of the green panic and other types of aviary grasses. If I throw green panic heads on the wire on top of the flight the stars will hang from the wire and feed on and also pull through the seed heads. Not all finches can do this, but it is also one of the first birds to land on the grass seed heads if thrown on the floor of the aviary.

The pairs are easily sexed as the star finch hen has very little colour under the chin even in well-coloured hens. The cock if looked at towards the beak has a very round circle of colouring from the forehead right around to the neck.

Birds breed from February until November, but young fledged in the early part of the year do not fully colour until October/November, much the same as the gouldian finch. You will need some room to hold the juveniles for several months until they colour, because usually the good ones are bred early in the season, being the first young of new pairs, or fresh young of older pairs.

They like to build their own nest with usually fine grasses and green panic seed heads and lined with feathers, either in the aviary brush or in the grass or shrubbery growing in the flight. They build a very neat smallish oval upright nest with the entrance halfway up the side. Both sexes incubate the eggs and when approached the bird will stay in the nest with their face at the entrance hole to the last minute.

Standard finch mix. They love soaked or sprouted seed. Will take boiled egg, live food when rearing young, but not necessary, but as much seeding grasses as possible.

My Experiences in Breeding Star Finches:

I have always kept star finches as part of my general collection. These are definitely one of my favourite species of finches and I have always tried to maintain good strains of quality birds.

I have kept the red stars continually from 1982 when I lived at my first house in Lennox Head right up until now at Broken Head. Since those early days I have not introduced any normals, only one yellow fawn cock bird and two red fawn hens. I keep normal and fawn in both red and yellow head colours.

There has always been the argument about cinnamon star finches versus fawn star finches, but no-one seems to be able to accurately point out the difference. The birds I refer to as fawns I do so because 15 or more years ago a breeder gave me, as he called it â€œa yellow fawn cock birdâ€ and the following year gave me two red fawn hens. All the offspring from these birds have been recessive and not sex-linked. 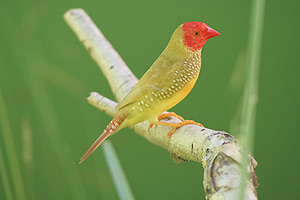 I use normal red-faced stars as a base bird and breed these birds to yellow-head or fawns to produce split birds. These split birds are put back to normal yellow-heads and fawns in either colour. I have always believed that it is necessary to keep breeding back to normal red-faced stars because continual breeding of mutation to mutation will definitely weaken and diminish the quality of the species. If the birds are good enough I will breed yellow to yellow or fawn to fawn, but the following year I will put those juveniles back to the normal red-faced. In the last couple of years the fawns have been some of the better birds I have bred, but I will still put these back to normals. 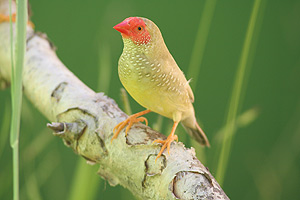 When selecting birds for breeding either in cock birds or hens, I look for the obvious birds that have the most size, type and head colour. With this I look for good star patterning and richness of chest yellow. The hens, I choose by the amount of colour on the face because with the stars the more head colour the rest follows. The birds with the most head colour will be the better birds and more likely to produce the better offspring. I have seen some star finches particularly the reds that not only have the red on the face, but red below the face on the chest. I have always regarded this as a fault and donâ€™t think it is desirable â€“ my personal opinion. 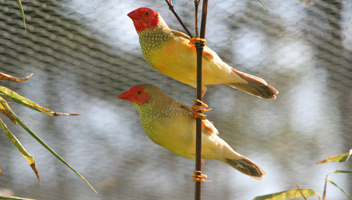